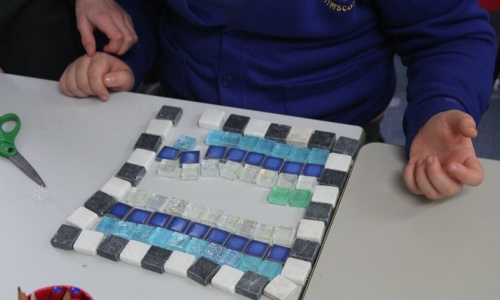 Today we had  a fun morning doing all sorts of Roman related activites.  We used the school's new electronic microscopes ( thanks you FOBS) to look at real Roman coins nearly 2000 years old. Pupils also built  a model of a Roman heated floor called a 'Hypocaust' using floor tiles and tested it with a hairdryer- it worked! The children also built colourful mosaics and learnt how to play two old roman soldier board games 'Calculi' and 'Ludus Latrunculi.'

Testing out the 'hypocaust'

Looking at Roman writing and coins using the microscopes.

Enjoying a fiercely contested game of 'Ludus Latrunculi' on a home made board.